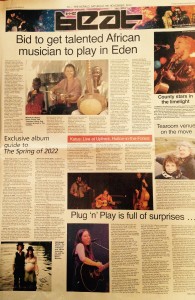 Singing and composing in English, Czech, French, Elfin, and also singing Bulgarian, Gaellic, Russian, her natural switch between languages is brilliant as is her ‘hulusi’ playing and unique singing through the flute. Katuš is a “true troubador spirit and one of the most refreshing pieces of originality and substance you are ever likely to hear”

Katuš’ new album ‘The Spring of 2022′ is a truely world mix of English, Czech, Polish, Russian, Mandinka , her own improvised tongue, and her Chinese ‘Hulusi’ -gourd clarinet. In 2013 , Katuš was booked to sing with Tinariwan at ‘Festival of the Desert’ in Burkino Faso. The festival was cancelled due to the war in Mali , and Katuš, stranded in The Gambia, met fellow musician and Griotte, Yankuba Conteh . The musical spark and harmony between them was immediate and so they spent a month singing together with Kora, Guitarlele and Hulusi, at naming ceremonies,weddings, whenever a celebration was needed,which is constant amid the timeless West-African chaos. They are trying to get Yankuba over to the UK from The Gambia in April/May to tour the album.

The album launch , played as a 5 piece band, at the Upfront Arts Theatre in Cumbria in Oct ,was a sell-out, with Tom Corda-Stanley – Double bass, Ben Monypenny – Violin, Rob Kitchen- Percussion, and Hannah Flynn – harmonies.

From the dusty streets of The Gambia , where the album was begun with Yankuba, to the sounds of owls in Katuš’ garden. The announcement on her native Prague Metro, which inspired one song , crashing waves and the clip-clop of their horses pulling a wagon, ‘The Spring of 2022 ‘ with all these sounds is a journey through Katuš’ , andinto Yankuba’s world.

Yankuba Conteh comes from a lineage of Griottes now settled in The Gambia, originally from Mali. His father was the late Momodou Conteh and his father Bai Konte. Yankuba’s spirit, creativity and voice are immense.

Katuš has toured with Seth Lakeman , supportedThe Levellers, played with Donovan and Nigel Kennedy, and toured with Czech Indie star Lenka Dusilova and Cechomor to name a few. Katuš recently appeared on channel 4’s ‘George Clarke’s Amazing Spaces’. Katuš has toured all over the world in her 13 year musical career including New Zealand, Australia, Ireland, Czech and France and this is her 5th album.

“Katuš, described accurately in the programme as a “world-folk duo” are, in the best possible sense, not like anything I have seen for a very long time. Where many performers and groups tend to find out what they can do and then limit themselves to a rigid style, Katuš delights in experimenting, innovating and enjoying the variety of sounds that canbe produced from an instrument or her voice. I lost count of how many languages she sang in, and as well as the guitar that she played for most numbers there was some excellent flute playing and a Chinese instrument called a ‘hulusi’. If I hadn’t been watching closely, I would not have been surprised to look up and discover that a new performer had taken the stage for every song.”

“I can’t believe she sings through the flute – amazing!” Nigel Kennedy. 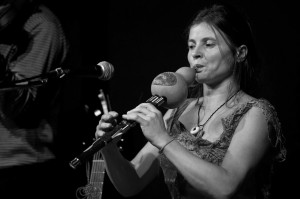